10. A Scientific Method to Prove the Existence of God


In nature we find life is produced only from life. Therefore producing life by using living cell or organism directly or indirectly at any stage during the process cannot be accepted as creation of life from nonlife. In fact the claims of synthetic life and synthetic organism already made by scientists are products of experiments in which living cell or organism is used at some stage of the experiment. These cases are not chemical synthesis of life. It should be purely the product of chemical synthesis involving chemical molecules and chemical reactions and not biosynthesis. If we succeed in creating life that way, it means we have effectively conquered death. There are also numerous investigations going on in gerontology to understand the process of ageing with the hope that these studies will deliver information on how to stop ageing. Thus once it is possible to create life from nonlife and we are able to control the mechanism of biological ageing, we will become immortal beings living in everlasting youthfulness. No death, no resurrection, no Hell and no Heaven!


Both creation of life from nonlife and conquering death are humanly impossible things as per the Quranic revelations quoted earlier. (In this context, it may be reminded that these two fatal characters (i.e., ageing and death) had evolved through natural selection, which, according to Darwin’s theory, should never happen. The prediction of the theory that no harmful trait should evolve in a species has thus failed. What we observe (Darwin also did) is not only did the very first organism evolve with death as its biological characteristic but also that character is preserved down the line of descent with certainty. In spite of the failure of the prediction, evolutionary theory is not rejected!)


There used to be comments by Quran-bashers that whenever a discovery is made by scientists, Muslims will immediately start shouting that it was mentioned in the Quran 1400 years ago. There are of course several discoveries of natural phenomena that are consistent with the Quranic revelations. But by that, nobody is saying the Quran is book of science. The revelations about the phenomena of life and death quoted here are also verses of that kind. This means the verses have scientific significance. In fact the phenomena of life and death can be defined and understood only in the light of the Quran. The very fact that these phenomena remain undefined and unexplained in biology even today is the proof of that. These Quranic revelations challenging the material concept of life are brought to public attention here well ahead of the discovery of life as nonmaterial phenomenon by scientists rather than after its discovery.
This is the golden opportunity for the scientific community to establish scientifically there is no God instead of simply arguing against God and His Scripture – the Quran. By proving life is material phenomenon by creating it from nonlife, scientists will not only be falsifying the Quran but also be confirming the nonexistence of God. Until that time, however, in the true scientific tradition, the Quran and existence of God remain unchallenged. Any argument against the Quran and God will be deemed unscientific till that time scientists create life from nonlife. It is just a matter of time scientists realized the impossibility of creating life from nonlife and quit. The failure to create life from nonlife will mark the end of modern biology and more importantly, atheism. That will settle the question of God or no God for good.
Posted by P.A. Wahid at 3:50 AM

9. Human Robot Testing Programme and the Ultimate Fate of Man

The divine purpose of creating this temporary universe is to provide infrastructure facility for testing human robots. The universe is nothing more than that.  The earth, human habitat, is the test laboratory. The universe must be treated, studied, understood and taught as a system from this divine perspective. Incorporation of divine purpose into our understanding of the universe can alone help correct our present erroneous view about the universe. Scientific evaluation of the ground realities also reveals close correspondence with the divine objective stated in the Quran. This matching of the universal system with God’s purpose of creation provides another undeniable scientific proof of the divinity of the Quran and existence of creator God.  The subject has also been discussed elsewhere [1].

Design of Earth vis-à-vis divine objective
To describe Earth in all its splendour is an impossible proposition. What is intended here is to draw attention to the Quranic revelation of divine purpose with Earth and to bring to focus how Earth is designed to achieve it. The universe is referred to in the Quran as “skies and the earth” (Q. 11:7). It may be noted that more importance is attached to Earth than any other region in the cosmos as it forms the venue of human robot testing, which is central to the divine mission. A lot of information is now available on various aspects of Earth that will help study the planet from the standpoint of divine mission [2, 3, 4]. NASA website also gives extensive information.

Studies in astronomy picked up momentum only during the last century. For centuries, astronomers believed that our galaxy, the Milky Way, made up the entire universe. In 1924, the American astronomer, Edwin Hubble, demonstrated that ours was not the only galaxy; there were billions of galaxies spaced far between. A galaxy is a huge collection of millions of stars, dust and gas. The Milky Way is a spiral galaxy consisting of more than 100 billion stars. It is supposed to have come into existence ten to fifteen billion years ago. The earth is part of the solar system belonging to the Milky Way (Figure 1). Solar system is situated on the outer edge of the Milky Way about 28000 light years from the galactic centre. It takes 225 million years to complete one revolution around the Milky Way. Our sun, located centrally in the solar system, is a medium-sized yellow star. It makes up 99.8 per cent of the mass of the solar system. Its diameter is 1,390,000 km. Following the recent de-recognition of the planet Pluto, there are now eight planets belonging to the solar system. These are Mercury, Venus, Earth, Mars, Jupiter, Saturn, Uranus and Neptune. Besides it also has at least three dwarf planets (Pluto is now treated as a dwarf planet), more than 130 planetary satellites, a large number of asteroids (rocky objects in space ranging from a few meters wide to several hundred kilometres) and comets, and the interplanetary medium. 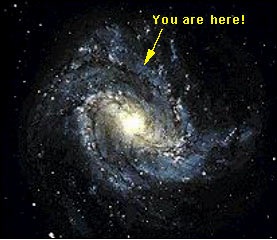 Figure 1. The position of the earth in our galaxy, the Milky Way
Image: NASA, Galaxy M83, similar size and shape to the Milky Way.
(www.ecology.com/.../earth-at-a-glance-feature/ Accessed 27-1-07)
The temperature at sun’s surface is around 5800 K while at the core it may reach as high as 15,600,000 K. The sun is presently composed of 70% hydrogen and 28% helium and the rest 2% is made up of mainly metals. The nuclear fusion going on in the core converts hydrogen into helium and therefore, with time the composition of the sun changes with the depletion of hydrogen. This nuclear reaction generates immense energy. The sun’s energy output is 386 billion billion megawatts per second for which 700,000,000 tons of hydrogen are converted to about 695,000,000 tons of helium. The energy is produced as gamma radiation which while travelling from the core towards the surface gets continuously absorbed and re-emitted in longer wavelength region so that by the time it reaches the surface it will be primarily visible light.  This is how Allah created the sun to serve as the primary source of energy to sustaining life on the earth, the human robot testing centre.
Earth is the fifth largest planet in the solar system which is situated third from the sun. Earth is supposed to have come into existence 4.5 to 4.6 billion years ago. The earth weighs 5.972 x 1021 metric tons and orbits around the sun at an average distance of 93.1 million miles at a speed of 67000 miles per hour (18.4 miles per second). It takes 365.2422 days to orbit the sun. This duration forms the basis for reckoning a year. While orbiting the sun it also rotates with a tilt of 23.5o on its axis at a speed of 1070 miles per hour (at the equator). It takes 24 hours to complete one full rotation (360o). This duration is reckoned as a day. The earth pulls every object towards its centre. This gravitational force prevents every object from being thrown out into the space by its spin. Earth has a satellite, the Moon. The moon is at a distance of 384,000 km from the earth. A characteristic feature of the components of the universe be it a satellite, planet, star or galaxy, is their constant motion in their prescribed orbits. This is highlighted in the Quran at several places. “It is He Who created the night and the day, and the sun and the moon; all (the celestial bodies) swim along, each in its rounded course.” (Q. 21:33). It is the orbital motion that creates day and night, seasons, tides etc. All these have been designed so by the Creator for the benefit of man. “And He has made subject to you the sun and the moon, both diligently pursuing their courses; and the night and the day has he (also) made subject to you.” (Q. 14:33). “He has made subject to you the night and the day; the sun and the moon; and the stars are in subjection by His Command: verily in this are Signs for men who are wise.” (Q. 16:12). “It is Allah Who made the night for you, that you may rest therein, and the days as that which helps (you) to see. Verily Allah is full of Grace and Bounty to men: yet most men give no thanks.” (Q. 40:61). “We have made the night and the day as two (of Our) Signs: the Sign of the Night have We obscured, while the Sign of the Day We have made to enlighten you; that you may seek bounty from your Lord, and that you may know the number and count of the years: all things have We explained in detail.” (Q. 17:12). Through these verses Allah describes the purposes of the components of the universe (Table 1).
Table 1. Divine purpose of creation from Islamic perspective 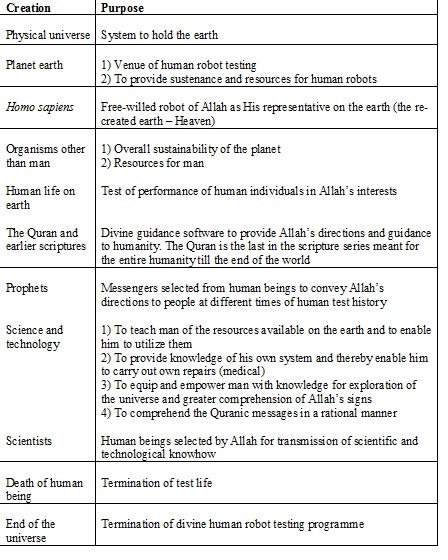 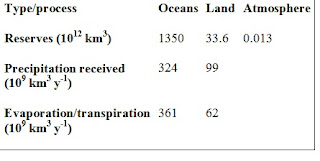 The process of hydrologic cycle (Figure 2) is responsible for circulation and conservation of the earth’s water [11, 12, 13]. The hydrologic cycle begins with the evaporation of water from the surface of the ocean. As moist air is lifted it cools and water vapour condenses to form clouds. One would certainly have expected that water would remain as vapour as it goes up and it would continue to go higher and higher in the sky. But nature has the mechanism to prevent it from going up beyond certain altitudes by transforming it into clouds. These clouds literally serve as the mobile overhead reservoirs of water that can be dispatched to any point on the earth through the control of the wind. Such a controlling mechanism has been indicated in the Quranic verses (Q. 15:22; 35:9) given above. This is indeed a wonderful natural phenomenon when we consider the quantum of water involved in the global transport and circulation. Once the water reaches the ground as rain, two processes occur: a) some of the water may evaporate back into the atmosphere and b) some of the water may penetrate the surface and become groundwater. Groundwater either seeps its way into oceans, rivers, and streams, or is released back into the atmosphere through transpiration (via plants). The remaining quantity of water on the earth’s surface is the runoff, which empties into lakes, rivers and streams and is carried back to the oceans, where the cycle begins again. The total quantity of water that is transported to the atmosphere annually is about 423 x 109 km3; the same quantity of water is returned to the earth through precipitation, thus conserving the total water content of the planet [14, 15]. 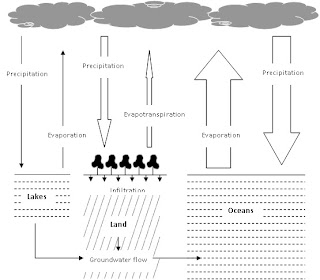